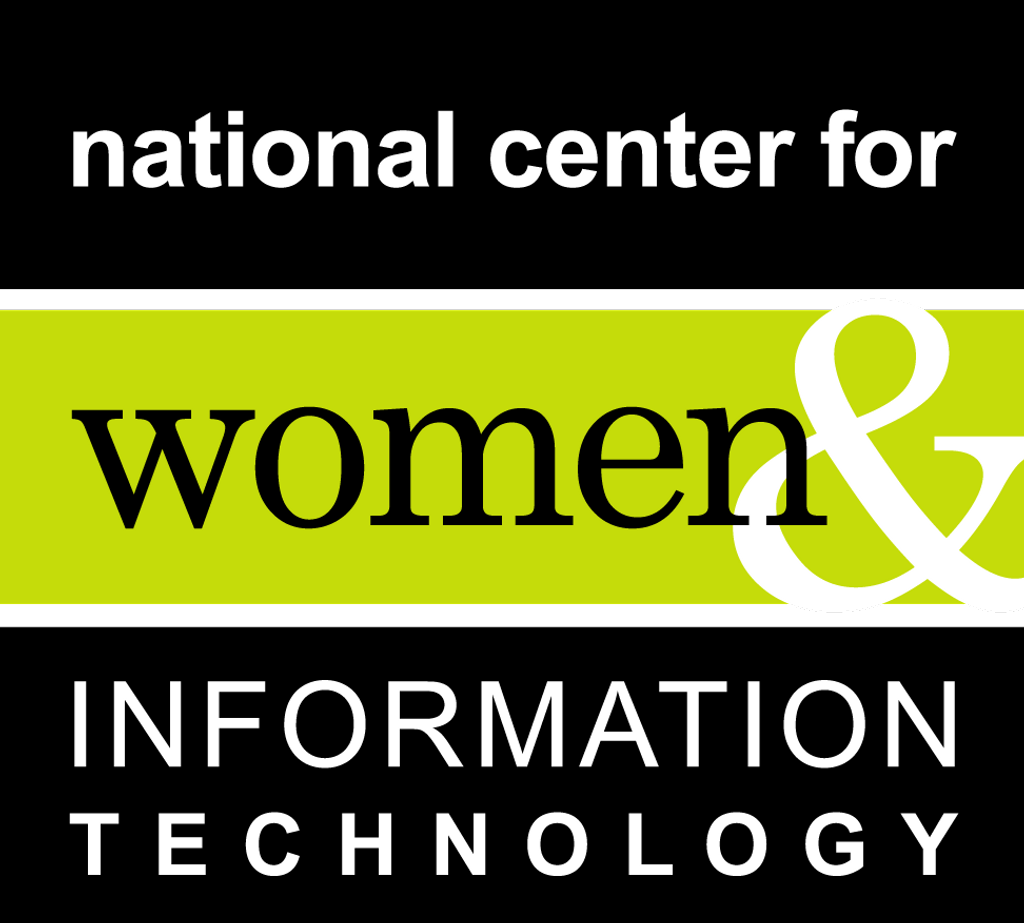 THE IDEA YOU DON'T HAVE IS THE VOICE YOU HAVEN'T HEARD.

Master the skills to lead change and reveal the potential in everyone.

The National Center for Women & Information Technology (NCWIT) is a non-profit community that convenes, equips, and unites change leader organizations to increase the meaningful participation of all women — at the intersections of race, ethnicity, class, age, sexual orientation, and disability status — in the influential field of computing, particularly in terms of innovation and development.

NCWIT is the only national non-profit focused on women's participation in computing across the entire ecosystem, supplying change leaders from more than 1,200 organizations with resources to recruit, retain, and advance women from K-12 and higher education through industry and entrepreneurial careers by providing support, evidence, and action.

Revolutionizing the face of technology®

Noah, Luck & 7 others backed this

Bianca Alvarez grew up in Mexico, in the shadow of the University of Texas at El Paso (UTEP) where she looked forward to the endless educational opportunities that awaited her. Bianca had no idea that she would be placed in a computer programming class during her first year of college and even less of an idea that she would fall in love with it. But what she discovered about herself in that first class would change the course of her life. Bianca is currently a senior majoring in Computer Science, and is a fierce advocate for increasing girls’ and underrepresented populations’ participation in computing.

My vision for … women in the tech industry is to see Latina girls having the same opportunity to learn programming skills at a young age, regardless of their ethnicity or economic status.

Bianca, like so many school-age Latinas in the US, had little exposure to computing and technology while growing up. Once at UTEP, she became actively involved in clubs and nonprofit volunteer work to share her experience as a Latina in technology. She learned about the National Center for Women and IT’s (NCWIT) TECHNOLOchicas campaign and the Aspirations in Computing (AiC) Community. Bianca became an Ambassador for TECHNOLOchicas and a member of the AiC Community where she discovered the NCWIT AspireIT K-12 Education program and decided that was the perfect way for her to spread her knowledge to younger girls.

As a Latina undergraduate student pursuing a career in Computer Science, it can be both challenging and difficult to “fit in”… when I started my bachelor in Computer Science, I did not have any programming background. I had to study more to get ahead in the classes … you need to practice to be good at it...

Bianca partnered with Latinitas, a nonprofit organization whose mission it is to empower all girls to innovate through media and technology, and created a program to teach middle school girls how to code. Bianca’s first AspireIT program, “Latinitas Code Chica,” was a huge success and became the template for a handful of other programs, with the next program, “Chica GeNiUS,” starting in February 2020.

I knew I wanted to … tell them not to be afraid of stereotypes. Sometimes we believe that only superheroes in the movies can do amazing things. If you believe you can do it, and work for it, you will be part of the next generation of students impacting the world. Start now! Most importantly, start small, sometimes to impact your community does not mean to reach thousands of people, for me, impacting your community means sharing your passion and skills to change someone else's life.

Many of the program participants live in low-income households, and their access to computers, internet, and technology is very limited; most only having access to technology at school. With the majority coming from Hispanic families, often as the first generation in the United States, participants have likely never used some of these forms of technology. Bianca and Latinitas, through NCWIT AspireIT, hope to break cultural barriers and the stereotype that females do not belong in these careers, as well as social divisions created by limited economic resources.

When we were in middle school, we weren't aware of computer science and the impact it [would] have on our daily life. We want to explain … the meaning of computer science, and how learning these skills will help … solve the most challenging problems in any area.

Another important element to the programs Bianca delivers is to make sure the participants learn the basics of problem solving and how computer science connects to the world. Bianca teaches them how programming and music, art, and science can be combined to create solutions that can benefit their community. It is also critical that Latinas understand they belong in – and are a part of – the technology world, and that their presence will impact how technology is developed in the future. And Bianca really wants them to know that computer science is for everyone and is fun!

1.2K+
NCWIT is a non-profit community of more than 1,240 universities, companies, non-profits, and government organizations nationwide working to increase girls’ and women’s meaningful participation in computing.
16K+
The NCWIT Aspirations in Computing Community. Currently 16,000 members strong, this community has a very important research-based mission – to help mitigate isolation technical women feel in their classrooms and to encourage them to persist. The AiC Community also provides opportunities for scholarships, internships and training.
90%
90% of NCWIT Aspirations in Computing (high school program) participants persist in STEM disciplines in post-secondary; 82% persist in computing.

NCWIT Aspirations in Computing (AiC) changes what's possible for women in technology from K-12 through career by offering the kind of encouragement that combats isolation, enables long-term persistence, opens doors, and changes lives. AiC uses program elements that spark interest in computing (AspireIT); recognizes and celebrates women's technical aspirations and abilities, as well as the educators who support them (AiC Award Recognitions); and, provides an expansive, supportive network (AiC Community).

NCWIT AspireIT Peer-led Computing Education is designed to teach K-12 girls programming fundamentals and computational thinking in fun, creative, and hands-on environments. Participants are K-12 girls who want to learn computing from leaders who are AiC Community members who want to "give back" to younger girls and learn valuable leadership skills and receive mentoring from organizations that want to partner with an AiC Community member to bring AspireIT to their community.

The NCWIT AiC Community is a phenomenal network for technical women in computing and engineering who receive benefits such as private invitations to virtual and in-person meetups, visibility for technical achievements, computing outreach opportunities, hands-on activities for exploring computer science concepts, exclusive access to scholarships, internships, job opportunities, and more. Participants include 9th-12th grade students who received an Award for AiC and students who are enrolled in a post-secondary institution (community college, college, or university) with a major or minor in a computing or engineering discipline, and also self-identify as women, genderqueer, or non-binary.

Through C4C, NCWIT offers professional development, ranging in length from one-hour webinars, to one-day workshops, to two-and-a-half-day institutes that include advanced leadership development.

TECHNOLOchicas (TC) is a campaign of the NCWIT K-12 Alliance to increase the visibility of Latinas in technology, normalize technology as a career for young Latinas and their families, and provide resources and experiences to highlight pathways into computing. Started as a collaboration with the Televisa Foundation, TECHNOLOchicas launched in 2015 and NCWIT is currently planning for the launch of TECHNOLOchicas 4.0 in late 2019.

in any of the disciplines they choose to focus on.”

Sit With Me (SWM) is a fun, creative way to get talking. With its iconic red chair, Sit With Me events allow everyone-men and women, technical and nontechnical-to participate in a meaningful exchange that puts more seats at the table so more voices, and ideas, can be heard. SWM is a national advocacy campaign that celebrates women's contributions to technology through local events. Businesses and post-secondary education institutions use the SWM platform to host dialogues about how technical women are changing what's possible in technology. These events create a safe and open space for teams to reflect on the value of diversity and inclusion while allies get to show their support for women.

When everyone sees the value of what women bring to technology, creating an inclusive environment for women to thrive becomes a shared goal. Open the door, pull up a chair, and host your own Sit With Me event.

“The RED CHAIR (it was so wonderful, it gets capital letters!) was the perfect feature to include. The young ladies got the sense that their passion for technology is truly needed in the world.”

NCWIT Aspirations in Computing (AiC) needs volunteers like you to complete its mission of revolutionizing the face of technology. Together, we can help to create a diverse and inclusive tech workforce—one where ideas are emboldened and possibilities thrive.

Sponsor AiC by making a financial or in-kind contribution. Email your interest to [email protected]

Organize employees to volunteer with AiC as Application Reviewers. Get started at www.aspirations.org/VolunteerReviewer.

Mentor AiC Community members as they provide hands-on computing to K-12 students. Find out how to become as an AspireIT Partner, serving as a fiscal agent and more: www.aspirations.org/aspireit/partner.

Volunteer virtually as an Application Reviewer. Get started at www.aspirations.org/VolunteerReviewer.

Spread the word about Aspirations in Computing awards throughout your network: www.aspirations.org/AiCAwards_Share.

Support AiC by making a donation to NCWIT: www.ncwit.org/donate.

NCWIT AspireIT is designed to teach K-12 girls programming fundamentals and computational thinking in fun, creative, and hands-on environments. AspireIT participants are ultimately encouraged to contribute their unique perspectives and ideas to future innovations, and its impact is undeniable: Since 2013, more than 9,500 girls have received an estimated 295,000 instruction hours through 436 AspireIT programs in 43 states — many of whom did not have prior computing experience.

Other
Learn more at
www.ncwit.org/